With Six by Nico announcing their next menu this week, I figured I’d share my thoughts on their current menu, which you still have just over a week left to try! With ‘Wonka’ on the horizon, Sam and I popped in to the Finnieston spot last Sunday to try their Vietnamese Street Food menu – our first since ‘The Chippie’, if you can believe it!

Life seemed to get in the way of returning before now, so we missed out on some amazing sounding menus – I’m particularly upset I missed Picnic and Forest, as both menus sounded right up my street! However, when the Vietnamese theme was announced, I was determined not to let another menu pass me by, so I quickly booked Sunday lunch, and it was definitely worth the wait.

The first thing we noticed was that the service since we first visited back in the restaurant’s early days is much slicker. With the popularity of the space not showing any signs of slowing down, they definitely make the best of their time, ensuring a quick turnover but never making their customers feel rushed. 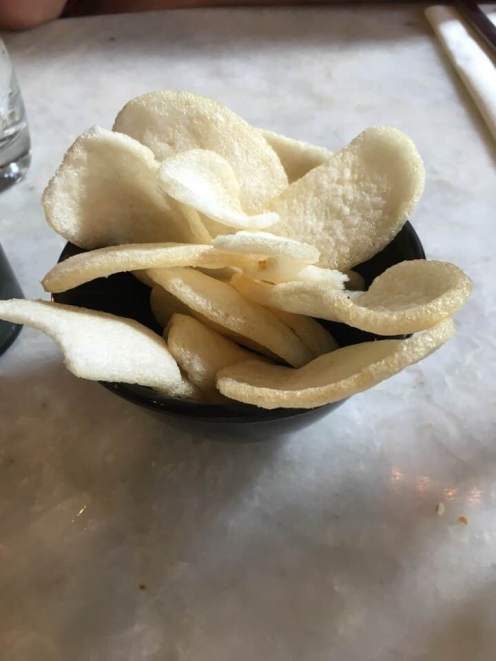 To start off the meal, I couldn’t resist ordering myself a Mango Mimosa from the aperitifs selection, and because we’d had no breakfast, we ordered one of the snack options: sourdough, whipped butter and prawn crackers. Nice and simple, right? Well, this is Six by Nico, so nothing is ever simple, and our delicious sourdough came with butter flavoured with chilli, lemongrass and ginger, and it was absolutely divine, I wanted a tub of it to take home! The prawn crackers were lovely and crisp too, but not out of the ordinary.

As we munched greedily on crackers and bread, our first course was served: an amouse bouche of crayfish and crab roll with a ginger and Thai basil gel. Given that this dish is the first impression for the menu, I was expecting it to pack a punch, and it certainly did. It was full of Asian flavours like coriander and ginger, the shellfish inside both salty and sweet, and the rice paper really soft and delicate. It was a really lovely and light way to start the meal. 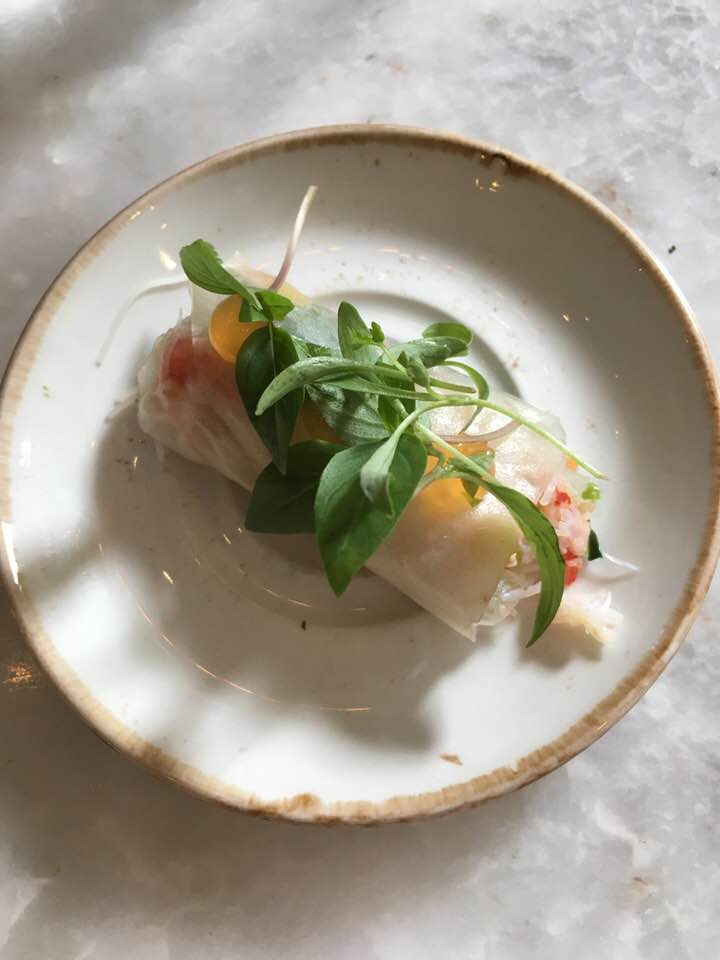 Next up was the ‘Pho’, or more accurately, Six by Nico’s take on the famous dish. It consisted of tiger and king prawns, chicken ‘noodles’, shiitake mushrooms and a Pho-style broth. This is a far cry from the classic dish, so purists may not be big fans of this course, I on the other hand, loved it. The prawns were soft and delicious, the chicken ‘noodles’ were so clever, and the broth was rich and salty. It did have quite a strong mushroom flavour to it, so those of you who aren’t fungi fans beware!

Course three was probably one of my favourites, called simply ‘Chao Fit’ and described as rice porridge, duck, peanut and mooli. What the dish actually consisted of was a satay marinated shredded duck on top of an Asian mooli slaw and sticky rice. The satay was so delicious, and the duck was melt in the mouth – definitely one of the highlights of the menu for me. 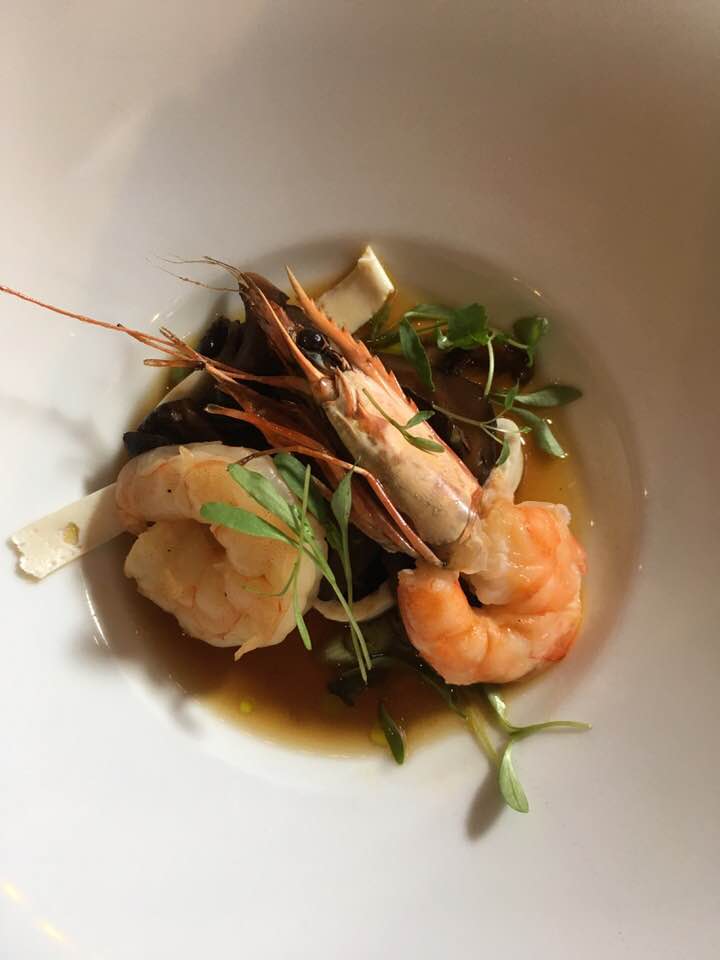 The duck was closely followed by pan fried sea bream with rice noodles, mango and chilli puree, pickled carrot and baby squid rings. Now as much as I like seafood, I often struggle with fillets of fish, so this was one dish I was concerned about, and I did end up taking the skin of the fish (even though it was perfectly crisp) off in order to make it more suitable for my tastes – that’s a helpful hint for you all, if you get a piece of fish that has a very strong fishy flavour, try removing the skin and just eating the flesh, it mellows the flavour considerably! The squid rings on the dish were lovely and crisp, I could have happily eaten a bowlful of them, in fact I would have liked them to be a bit bigger! The pickled carrot was zingy with lemon and vinegar, and the mango and chilli puree was delicious, sweet with just a hint of heat!

Next up, and last of the savoury courses, was the claypot pork belly. Naturally, being pork belly, it was my favourite dish of the day, because I am obsessed with the stuff! It was served with pak choi, water chestnut, coconut rice and charred pineapple and it was fricking amazing. The pieces of pork belly were super crisp, the fat completely rendered, the coconut rice had been cut into squares and pan fried so there was one crispy side, and the charred pineapple added tartness and sweetness in all that savoury goodness. A big thumbs up from me! 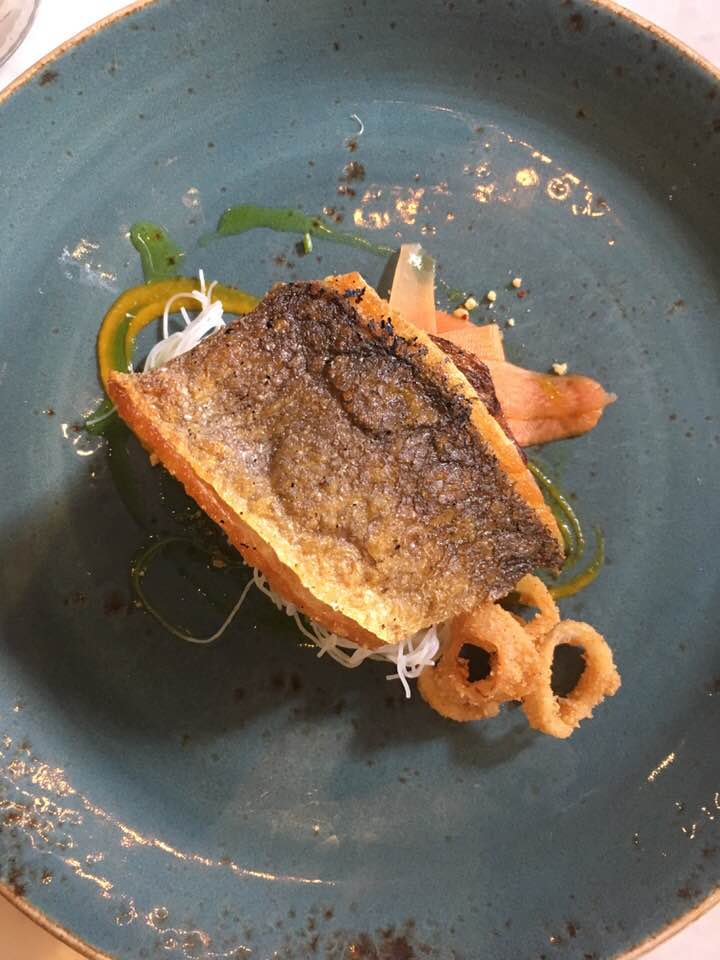 By this point, I was absolutely stuffed, and not at all ready for it when the dessert course was placed in front of us. The dish is also very different to how I imagined and how it was advertised on social media, I think perhaps to save time they created a much more simplistic version of the dish. At the bottom of the glass was a condensed milk panna cotta, layered with coffee cake, pandang and palm sugar cream and topped with a coffee tuile.

The flavours, in all honesty, reminded me of a tiramisu, but the quality of the ingredients was far superior! I don’t even LIKE coffee (shocking, I know, I don’t drink hot beverages, I must be the devil) but the coffee cake was stunning, it was really fudgy, almost like a coffee brownie, and the condensed milk panna cotta on the bottom was so sweet and melt-in-the-mouth. Despite looking quite intimidating in the glass, it was actually a surprisingly light dessert, and a lovely way to end the menu. 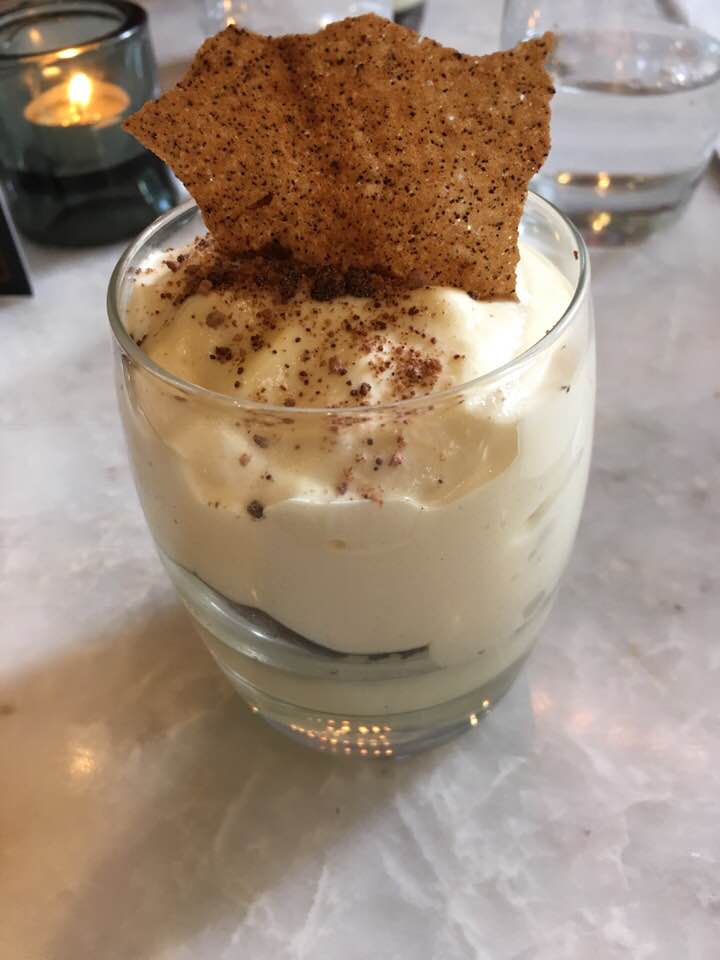 This menu cost slightly more at £28 per person, but considering our total bill came to just £69 for six courses each, a cocktail and a glass of wine, I really can’t complain. Six by Nico, in my opinion, is still offering an exciting and enjoyable dining experience at a fantastic price. You’ve got 10 more days to enjoy the Vietnamese Street Food menu before Wonka takes over, so hurry!