One of my favourite things about the Glasgow food scene is that it’s always changing.  There are always new ideas, new restaurants and new areas emerging all the time.  Six by Nico is an innovative and unique take on eating out, with a brand new, six-course tasting menu every six weeks, based on a different place or memory.  The restaurant opened on the 14th of March and comes after the continuing success of 111 by Nico in the West End, and so far, Six by Nico is following suit, with rave reviews left, right and centre!

As the menu is due to change on the 23rd of April, I’ll try to brief, because believe me, you want to catch this menu before it disappears.  The restaurant opened its doors with its first theme: ‘The Chippie.’  A nostalgic nod to the traditional fish and chip shop, this menu highlights the flavours of the chip shop and elevates them in a modern, unusual, and delightful way!

On entering the restaurant, situated on Argyll Street just opposite the Ben Nevis, we could immediately see Nico and his team preparing the dishes in their open kitchen.  We were seated at a table and given the set menu to look at, while a TV monitor showed the dishes being intricately plated up at the pass – a clever touch that allows customers to watch each dish being created from the ground up.  Each of the six dishes is based on a chippie classic, from scampi to the infamous deep fried mars bar, and is priced at an incredible £25 for all six courses – a true bargain!  We decided to go all out and get the matching wines, which was also priced at £25, meaning we got six courses and 5 drinks each for £50. 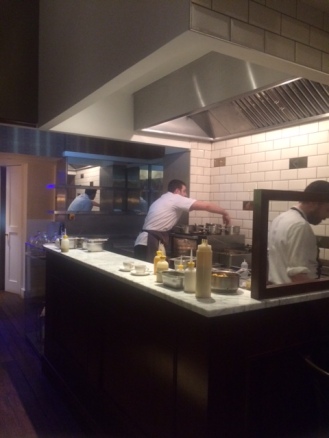 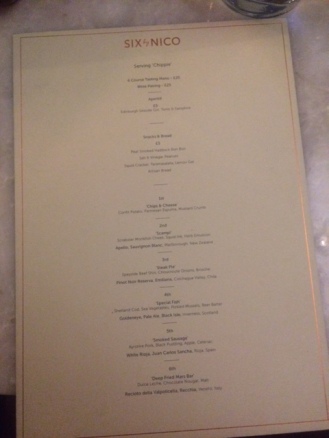 Our first dish, an amuse bouche, was inspired by ‘Chips & Cheese’ – a teacup filled with confit potato topped with parmesan espuma.  I was immediately impressed and taken aback by the amount of flavour they managed to put into such a small amount of food.  The parmesan espuma, or foam, packed a cheesy, salty punch, and the soft potatoes were buttery and delicious.  A really great way to wake up your taste buds in preparation for the rest of the meal! 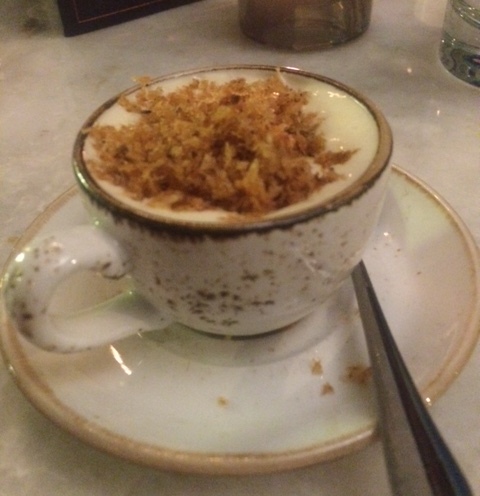 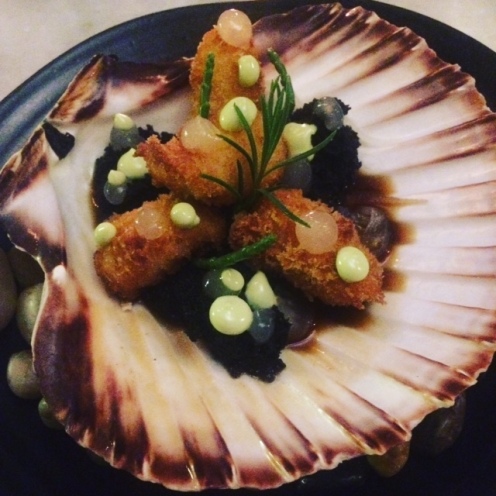 “Scampi” at Six by Nico

Our second course, Scampi, was one of my favourites – monkfish cheek breaded and fried, squid ink crumb, samphire, herb and lemon emulsion and a dashi sauce.  This was paired with a fresh Sauvignon Blanc from New Zealand, to cut through all those intense flavours.  It was beautifully presented in a scallop shell, and the fish was so crisp, yet so tender inside.  Every single element on the plate was perfectly balanced and it was so fresh and light.  Our second course, Steak Pie, was equally delicious, paired with a lovely, smooth, and mellow Pinot Noir.  Beef shin, brioche croutons, confit and pickled shallots, shallot rings and a beef jus – there are no words to explain how much intense, beefy flavour was in this dish, it really did capture the flavour and bring back the memory of a really good steak pie.

Course four was the Special Fish, a piece of Shetland cod with sea vegetables, pickled mussels, and beer batter scraps.  I mean, I’m essentially just repeating myself, but this dish was also incredible.  The fish was perfectly cooked, the batter crisp and crunchy, and the vegetables brought a freshness to the dish.  It was divine.  This course was paired with a Black Isle Golden Ale, which when eaten with the dish was very reminiscent of sitting in a beer garden in summer enjoying a bag of fish and a pint.  Sam and I both agreed that those first four courses stood up to the two Michelin-starred food we had at Dinner by Heston Blumenthal in London – no joke! 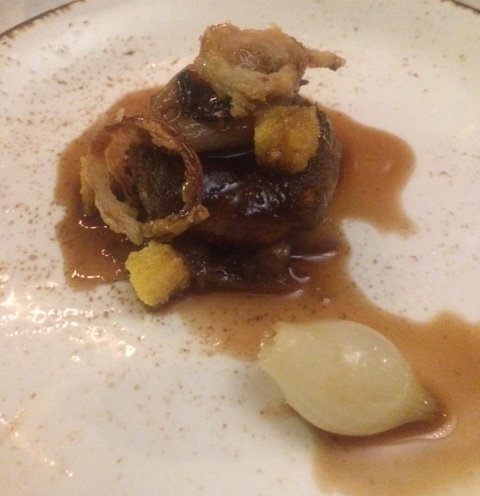 “Steak Pie” at Six by Nico 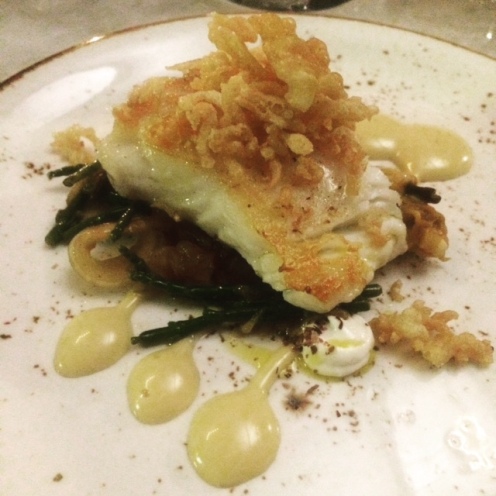 “Special Fish” at Six by Nico

The final savoury dish was the Smoked Sausage, paired with an unusual but crisp White Rioja, which really helped to cut through the richness of this dish.  A sausage made up of pork shoulder, belly, and black pudding, wrapped in spaghetti pastry, with different textures and styles of apple and celeriac, which came to the table covered in a glass cloche filled with smoke.  The meat inside the sausage was, as expected, incredible, and the salt-baked celeriac on the plate was delicious, but I would have liked even more of the meat and maybe a touch less celeriac.

For the final flourish, it was the Deep-Fried Mars Bar: salted caramel, chocolate nougat, malt parfait, deep fried pastry, and lemon gel.  The chocolate nougat was lovely and rich with a gorgeous flavour, but I wanted more of it, and possibly less of the lemon as it became the main flavour on the dish.  The dessert was, naturally, paired with dessert wine, which was the perfect match as the sweetness from the wine was perfectly balanced against the sharpness of the lemon. 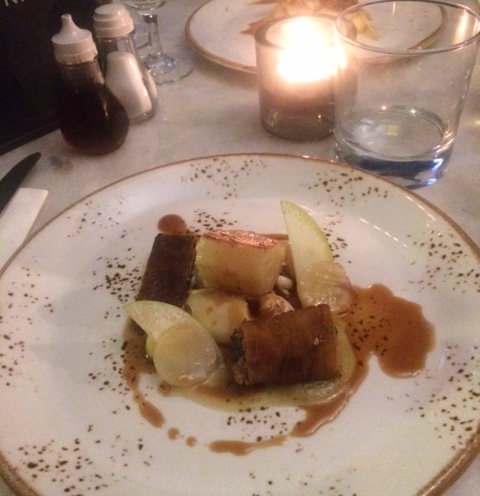 “Smoked Sausage” at Six by Nico 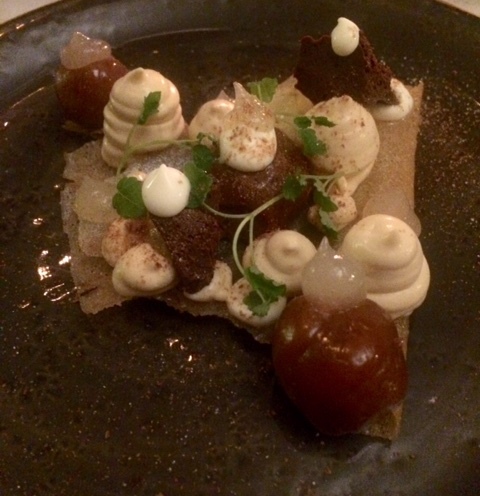 I am so excited to hear what the next menu will be, and I would go back tomorrow and eat this one all over again!  Nico has created something that will constantly evolve, keeping us interested and eager to find out where he’s going to go next.  It’s a genius idea done so well.  The service, the food and the price were all fantastic, it was everything I hoped for and more!