I’ve been meaning to write this post since the end of August, but moving house, changing jobs, going to a wedding in England and on a holiday to France somehow meant it got left on the back-burner…until now!

For our first wedding anniversary, we knew we wanted to get away for a couple of nights, somewhere we could relax and take the dogs with us. While discussing possible locations, we were reminded of the day we spent on the Waverley Paddle Steamer and our brief stop-off in Tarbert, Loch Fyne, somewhere we always meant to return to.

What made us want to return to this corner of Scotland was the incredible seafood, which essentially goes straight from harbour to plate, and a chance to explore the local countryside with the dogs. It’s a bit of a drive, about two and a half hours from Glasgow, but it’s worth it for the relaxed feel of the harbour, the easy-going locals and the delicious food.

Tarbert is a pretty small village, so accommodation options are fairly limited, especially if, like us, you’ve got dogs to think about. We ended up booking two nights in the Starfish Rooms, which were dog friendly and cost just £75 a night. For that price we got use of a simple but cosy double room with en-suite bathroom, the dogs could stay at no extra cost and we could venture to the village’s cafes for breakfast in the morning.

If you’re looking for something a little bit more special, Stonefield Castle is a ten-minute drive from the harbour, has dog friendly rooms and beautiful grounds. In fact, my brother is getting married there this month! However, a two-night stay will set you back at least £240, so it’s not cheap! We liked that our rooms were right by the harbour. It was a no-frills service, but our rooms were kept clean, the owner was friendly – we spent quite a bit of time chatting to him in the local pub – and there was plenty of space for the dogs.

As with the accommodation, restaurants are limited, but the few that exist serve up some of the freshest seafood you could ever hope for. Attached to the Starfish Rooms we were staying in is the Starfish Restaurant, deemed by everyone as the best restaurant in the harbour. We headed there on Saturday evening (having booked about two months in advance) and the entire meal was not only delicious, but so reasonably priced we were genuinely taken aback when the bill arrived (in a good way).

As well as their a la carte menu, there are a range of daily specials available to choose from based on whatever seafood is available. I opted for grilled langoustines to start, followed by a half lobster. It might seem a bit silly to get lobster after langoustines (known as the ‘poor man’s lobster’) but I didn’t care because they were both fantastic. My only criticism was that the seafood was served with a side of bread as opposed to chips or vegetables.

The great thing about seafood though is that although delicious, it’s very light and leaves you with plenty of room for dessert. Sam being Sam, he got the cheeseboard, while I opted for the Frangelico Chocolate Pot with candied hazelnuts, which was just as rich and delicious as it sounds. Not only was the food fantastic, but the restaurant had a great buzz to it and the staff were so welcoming. If I’d planned well enough ahead, I would have eaten there both nights. 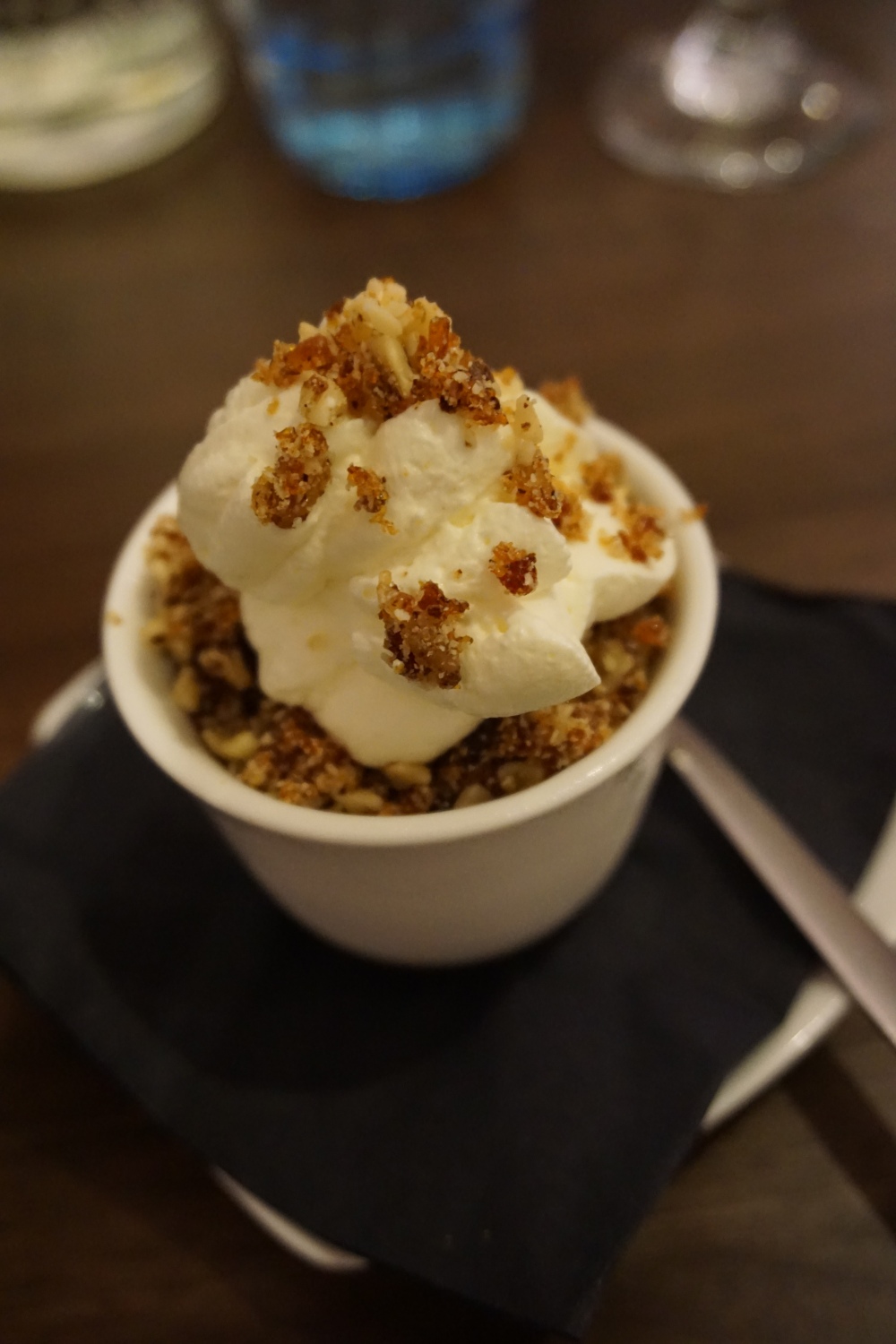 In the mornings, we had breakfast at Ca’Dora Café, which was, luckily, dog friendly. From full Scottish breakfasts to a simple bacon roll, they kept us fed and fuelled for the day ahead. They also have a cabinet filled with beautiful fresh cakes and bakes or, if you’re around later in the day, fresh ice cream!

When I told my dad we were going to Tarbert for our anniversary, he looked at me like I was mad. “There’s nothing there, what are you going to do?!” he asked, bewildered. He needn’t have worried though – we kept busy! After taking the dogs for a walk around Tarbert Castle and fuelling up at Ca’Dora, we jumped into the car and headed for nearby Skipness.

At the beach, we pulled up and let the dogs play in the sea, staring out at the beautiful skyline, which included a gorgeous view of the Isle of Arran, before piling back into the car and making our way to Skipness Castle. The Castle dates back to the 13th century and is in fantastic condition. It’s also home to the Skipness Seafood Cabin, which serves fresh, local seafood out of a wooden cabin located next to the Castle estate and is definitely worth a visit.

Find yourself a picnic table and peruse the menu filled with options like fresh mussels, langoustines, oysters, salmon, crab and more. We opted for two plates of langoustines and a side of bread, but in hindsight, if I went back I’d go for something hot, like mussels or grilled queenie scallops. As much as I love langoustines, getting them cold and having to de-shell them can be quite a faff. They were still delicious; I’d just rather have them grilled with garlic butter. There is something quite magical though about sitting in the Scottish countryside enjoying a cold glass of wine and beautiful, locally sourced seafood.

After lunch, we decided to take a drive in the direction of Campbeltown, just enjoying the beautiful coastal scenery, and eventually stopping off at a surf beach that I can’t actually remember the name of. There is something to be said though for just getting in the car and getting lost in the countryside. It reminds you just how lucky we are to live in such a beautiful country and you often end up finding hidden gems.

In the evenings, we headed to the local pub, The Corner House, which was not only dog friendly, but on a Saturday night it is filled with locals who are incredibly friendly – although it helps if you have two big, beautiful dogs as a talking point!

It’s not exactly a glamorous or action-packed weekend break, but there is something very inviting about the laidback atmosphere of Tarbert. If you’re a seafood fan, this place is heaven, and I would happily go back for a shellfish-fuelled weekend escape. 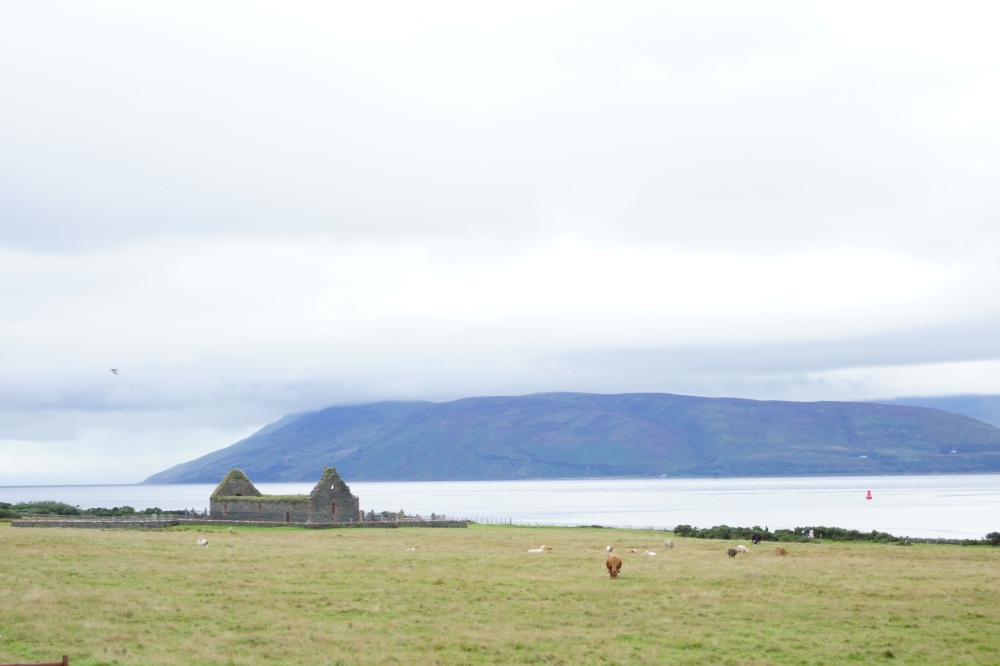