Back in 2014 when I originally started my blog, I wrote a post at the end of the year focusing on my most memorable plates of the year, and I thought with the blog back up and running, why not renew the tradition?

I’m still finding it very difficult to believe that Christmas is less than two weeks away and before we know it, it’ll be 2018. I’m not one for sweeping statements or expecting the start of a new year to suddenly change things, but I do think it’s important to look back on the past year and remember both the good and the bad.

2017 has been a real mixed bag, I relaunched The Glasgow Diet, which I’ve been wanting to do for such a long time, I got married, and I had a book published, but there has also been loss and difficult periods, so I won’t be entirely sorry to see 2017 go! 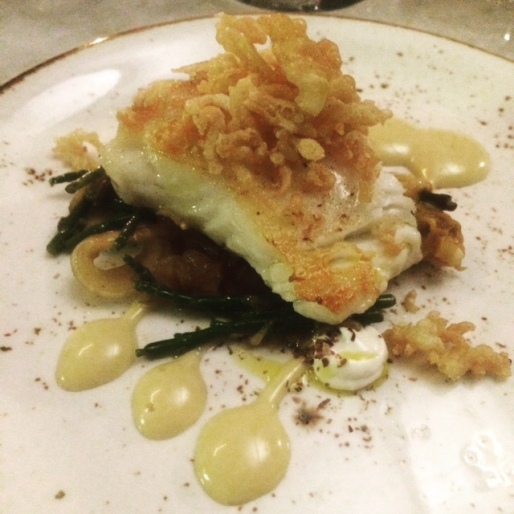 “Special Fish” at Six by Nico 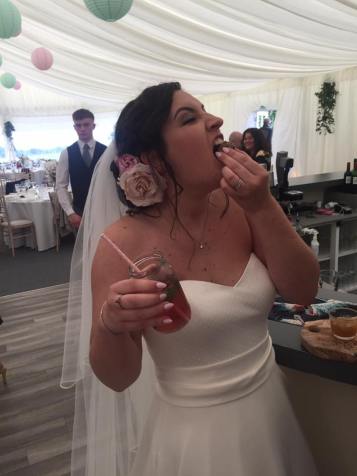 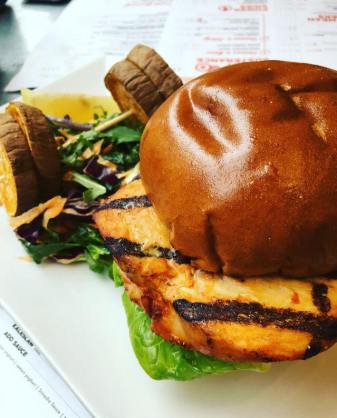 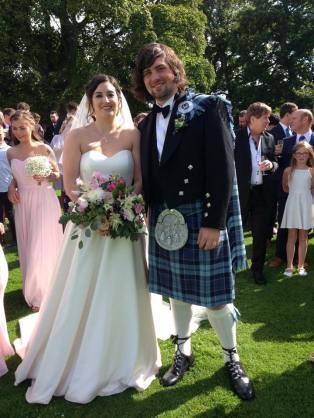 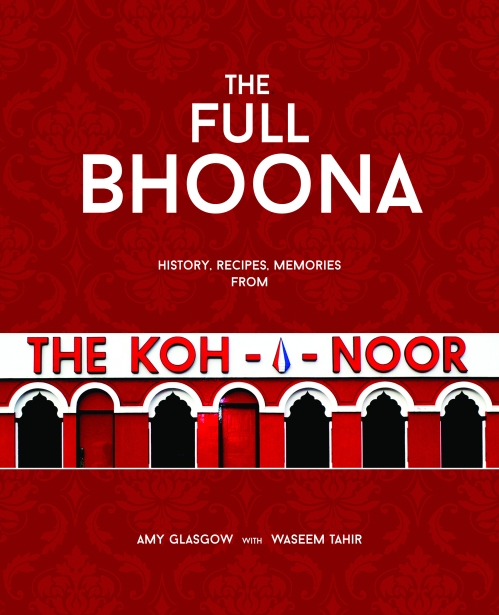 Having relaunched the blog, my year in food has been exciting and varied. Glasgow’s food scene is, in my opinion, one of the greatest. It’s constantly changing, with new restaurants, new districts, it’s been near impossible to keep up! I have only touched the surface of the Glasgow food scene, even so, here are my most memorable plates of 2017…and here’s to a delicious 2018!

Sherried Scallop at Dinner by Heston

Alright, I know, this is obviously not part of the Glasgow food scene, but I couldn’t not include my first experience of Two-Michelin-star dining, could I? To be honest, every part of this meal was incredible, you can read the full review here, but special mention goes to my incredible scallop starter. Consisting of pan seared scallop, scallop tartare, smoked cauliflower, cauliflower cream, shiitake mushrooms and a sherry sauce, it’s one of the best things I’ve ever eaten.

Cajun Squid at The Big Feed

This may seem like an odd choice, but the launch of this street food event was a big thing for the Glasgow food scene. Street food has become so popular over the past few years, so why not dedicate an entire event to it? The Big Feed brought together some of the top street food vendors under one roof, and though that very first weekend wasn’t without its problems, the event has come on leaps and bounds over the past year. My favourite vendor was, annoyingly, the one that always had the longest queue: ShrimpWreck. Their salty and spicy cajun squid is moreish and memorable.

Scampi at Six by Nico

Another revolutionary addition to the Glasgow food scene, Six by Nico has to be one of the most talked about restaurant in Glasgow this year. Their opening menu, The Chippie, is still one of the best meals I’ve had this year, and the whole experience really blew me away. My favourite dish from their stunning first menu was definitely the Scampi, although it’s very quickly followed by the Steak Pie and the Special Fish!

Pigeon at The Gannet 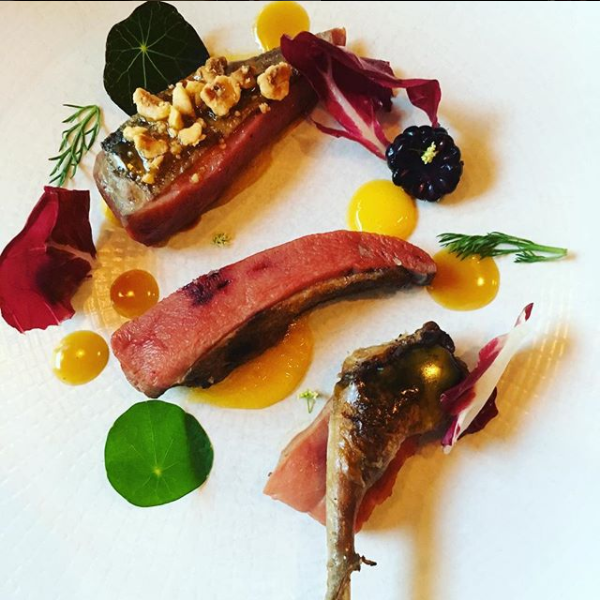 For my 27th birthday this year, Sam took me to The Gannet, a restaurant I had been dying to try out for a very long time, and oh my, was it worth the wait! Everything about my experience at The Gannet was first class, and the head chef Peter is just a lovely man. The highlight was definitely the pigeon starter, which was served with cured egg yolk, brambles, roast hazelnut, and radicchio. It’s the best pigeon dish I have ever eaten.

Pork Belly at My Wedding

I have to mention my wedding meal, don’t I? Not just because it was an incredible, memorable day I’ll never forget, but also because the food was outstanding. I have to be honest, I didn’t actually eat much of the meal on our wedding day – a mixture of adrenaline and my corseted dress suppressing my appetite. However, before the wedding, we went to taste the menu, and there I really appreciated our main: slow cooked pork belly, black pudding bon bon and potato rosti.

I’m following our wedding meal with a mention of our incredible mini-moon in Prague. I know, not in Glasgow, but our week in Prague was filled with some of the best food I’ve had all year. The real highlight though was the last meal of the holiday, at an Asian fusion restaurant called Sansho. Everything was incredible, but the Octopus satay was a real highlight, and it was the first time I’d eaten it too!

It makes me very sad that it took me until NOVEMBER of this year to visit Pot Luck. This little southside cafe has been getting so much buzz, and for good reason! I’d seen so many pictures of the hot cakes and dreamed of their greatness, but the reality was even more incredible! These fluffy cakes of deliciousness were paired with poached plums, almond kulfi, and the ever-instagrammable pashmak, or Iranian candy floss. I want these for breakfast every damn day.

Bringing us back to Glasgow now, the autumn taster menu at Red Onion was definitely one of my more memorable meals. Head chef and owner John created a stunning, seasonal menu filled with the best of Scotland’s autumnal produce, from wild mushrooms to haggis. The highlight though was the main course: Caledonian sirloin with rosti potato, smoked sweetcorn puree, kale and Quigley’s Red bbq glaze. The rosti potato was just…so crisp, so delicious, so yummy! 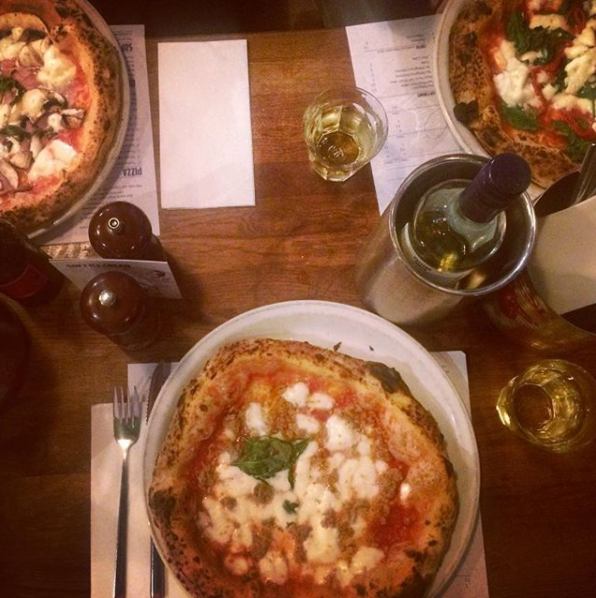 I’m sure it will shock and appall you to hear that I only visited Paesano for the first time this year. Crazy, I know! When I finally got round to it though, I completely understood the hype. The pizzas here are just incredible, and every time I have a pizza from elsewhere it pales in comparison. With their fresh, traditional ingredients and simple menu, its no wonder this place does so well. I’ve tried a few of their pizzas now but my favourite is still number 7, with fresh Tuscan fennel sausage.

Exotic Fruit at 111 by Nico

The big brother of Six by Nico, 111 by Nico is a wonderful little spot in the west end that brings beautiful produce to the plate in a fine dining setting, while also training up Glasgow’s most promising young chefs. We had an absolutely stunning meal there over the summer, and I could mention any dish, but the highlight has to be the dessert of ‘Exotic Fruit’. The dish consisted of white chocolate arancini, mint aero, passionfruit and mango, with shards of meringue, and although that sounds like a lot of crazy flavours for one plate, it was beautiful.