Some restaurants just make you happy.   For me, Bread Meats Bread is definitely one of them – just the thought of it makes me smile, so I thought it was best we talk about their new-ish west end location on Great Western Road.  The location is perfect, the space much bigger than its St Vincent Street sister, and after visiting a couple of times now, I think its time I shared my thoughts!  On my most recent visit, we turned up at 11.50am to an empty restaurant – something I don’t think I’ve ever seen when it comes to Bread Meats Bread, but the tables quickly began to fill as we sat down. 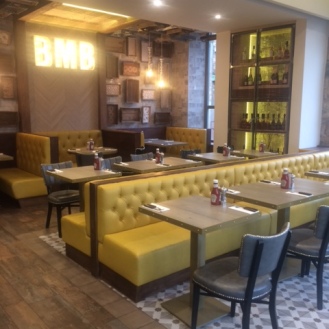 With the restaurant empty, you can really appreciate the décor of this venue, which uses a lot of up-cycled materials – from wooden trays as wall art, to wooden candlesticks as pendant lamps.  The mustard-yellow leather that covers most of the seating works surprisingly well against the wooden flooring, monochrome tiling and neutral wall colours.  The space they have at this site means they’ve really been able to go to town creating a unique look that is both rustic and modern, and I love it.

We ordered drinks and perused the menu, me unable to decide between the Butter Bacon Burger (a beef patty with crisp bacon, onions, smoked mozzarella and bone-marrow butter) or the Great Western Wolf, their signature burger topped with spicy ‘Nduja and pulled pork.  The choice, to most people, would seem obvious, but I’ve had its brother, The Wolf of St Vincent Street, at the city centre restaurant and wanted to try something different.  In the end, my fiancé kindly agreed to split our burgers, so I could have a bit of both – a keeper, don’t you think? 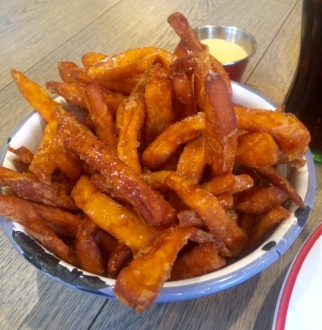 Sides wise, we ordered a lot, we’d skipped breakfast and were naturally ravenous, and with our eyes far bigger than our stomachs, we ordered a small poutine, chicken nuggets and sweet potato fries.  With us arriving so early, we managed to skip the big lunch rush, so our food arrived pretty fast, and our server was friendly and attentive, regularly checking in to ensure we had everything we needed.

My overall feeling towards the Butter Bacon Burger was that, by any other standards, it was a really great burger, but by Bread Meats Bread standards, I felt it was just slightly lacking.  The bacon and onions on the burger were so unbelievably crisp – a real highlight – and the patty was flavoursome and juicy.  The issue for me (I say issue, the burger was still great, so it’s more of a personal preference) was that the burger needed more of the bone-marrow butter, and more of the cheese, as both seemed to get a little lost.  The flavour was certainly there, but only once I got to the dead centre of the bun, as opposed to permeating throughout the entire burger.

The Great Western Wolf was, as expected, incredible.  The pulled pork was juicy and tender, and the mixture of ‘Nduja and sriracha mayo provided just the right amount of heat.  The sweet potato fries were tasty and crunchy, as always, but I tried to steer relatively clear of them so I had room to sample the two sides I hadn’t tried before.  The chicken nuggets had a great, crisp coating, and the meat inside was juicy, but as it was thigh meat, the colouring was darker and the flavour stronger than breast meat, so be aware if you do decide to order them, as I was initially taken aback by the colour of them, but delicious batter and moist meat are always a good combination.

The real winner from this meal, for me, was the small poutine.  I’d never ordered one before because, to be honest, the idea seemed kind of strange to me, and the portion size of the normal poutine is a meal in itself.  The addition of the small poutine as a side meant we could sample it without worrying about having room to finish it, so try it we did, and oh my word, what a revelation!

The gravy was some of the best I’ve ever tasted, the chips were fluffy, the cheese curds added texture and it was just…awesome, that’s all I can say.  I know it sounds like the kind of drunken snack you purchase after a night at The Garage and then regret in the morning, but this is different.  Based on the Canadian original, the quality of the gravy alone is enough to elevate this dish, and honestly, I’m thinking about ordering a full-size poutine instead of a burger next time – I know, crazy, right?

As ever, Bread Meats Bread delivered a delicious meal, friendly and fast service, and value for money.  I may be late to the party when it comes to the poutine, but better late than never, so if like me, you’ve been holding back, don’t, go forth and discover the wonder of the poutine!