As a special Christmas/Valentines treat, Sam and I spent a weekend in London a few weeks ago to go and see Les Miserables – our favourite musical – and enjoy a little London luxury…

On arrival in London on Friday evening, we opted for a quick and cheap meal at Fire & Stone in Covent Garden, which serves pizzas inspired by different areas across the world.  I went for the ‘Peking’ pizza, topped with shredded duck, hoisin sauce, spring onion and cucumber – basically Chinese duck on a pizza base instead of pancakes!  We got a pizza and a cocktail for £15 each, which in London felt very reasonable, but the pizzas were average and I don’t feel like it’s somewhere I’d rush to recommend.  It served our purposes after a long train journey, but I feel like places like the heavenly Paesano Pizza in Glasgow is doing a similar thing but with much better pizzas! 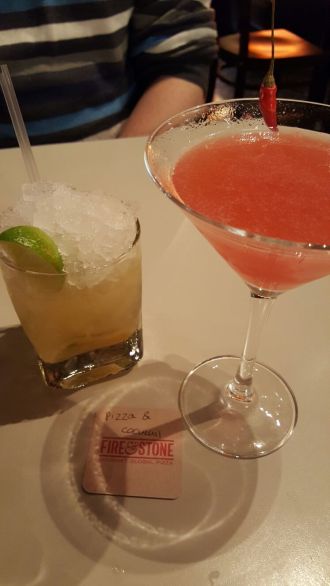 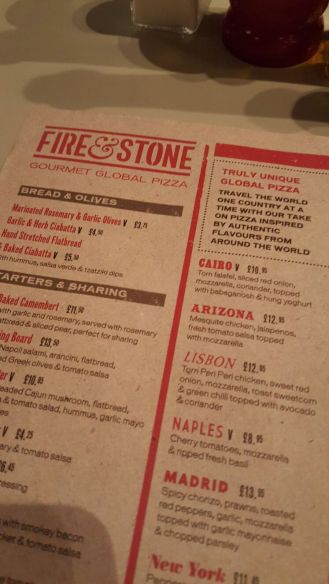 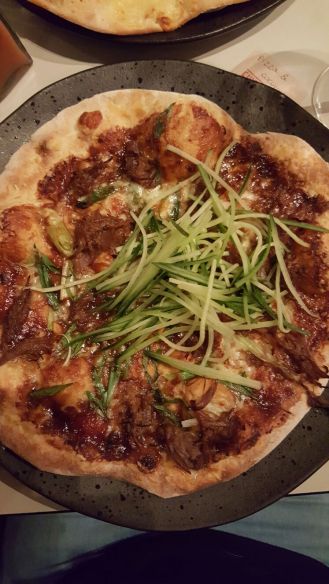 The next morning we headed out to Brockley, where Sam’s Uncle runs The Brockley Deli, just metres away from the train station.  Brockley is somewhat comparable to Glasgow’s Finnieston – previously quite run down and not up to much, now filled with trendy cafés, delis and shops.  The Brockley Deli serves incredible breakfast and lunch options, an array of beautiful cakes and bakes, fresh bread and unusual store cupboard items, as well as freshly made coffee.  After my crisp bacon, mozzarella and tomato croissant, I decided to treat myself to a famous ‘Cronut,’ opting for the Salted Caramel & Pistachio flavour, which was so delicious and so filling!  Fried croissant dough topped with pistachios and filled with salted caramel = heaven.  I see now why the croissant/donut hybrid gets such rave reviews! 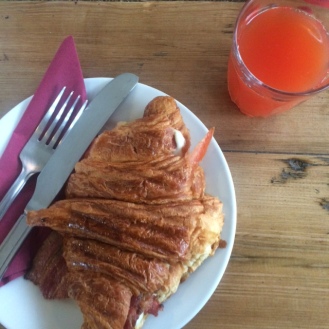 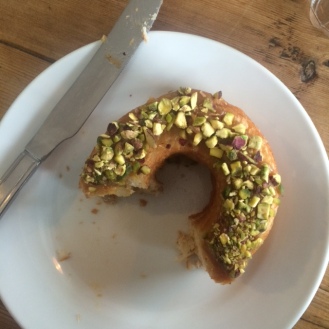 We left the deli feeling stuffed but satisfied, and made our way back into London for our matinee showing of Les Miserables, where we were sat in the front row!  The show was, of course, unbelievable.  The staging is incredible, using a revolving centre stage to create illusions of movement and a great way of changing scenes and moving the set around.  It was mind blowing and left us both in tears as the curtains were drawn!

After the show came the real magic as we headed over to Knightsbridge to the Mandarin Oriental Hotel, where we had a booking at the two Michelin starred ‘Dinner by Heston Blumenthal.’  We were a little early for our booking, so we were taken to the bar and offered a drink while we waited, but the drinks here are not cheap!  It was around £15 for a glass of wine, and £7.50 for a bottle of beer – not for anyone on a budget!

When we were led to our table, we walked past the incredible, glass-front kitchen, where customers can see their dishes being created, with the glass providing a buffer from the inevitable noise, smells and heat that come from a busy dinner service.  Having never eaten in a Michelin starred restaurant before, we weren’t sure what to expect, but within minutes of sitting down, the level of service quickly told us we were in a whole new world of hospitality. 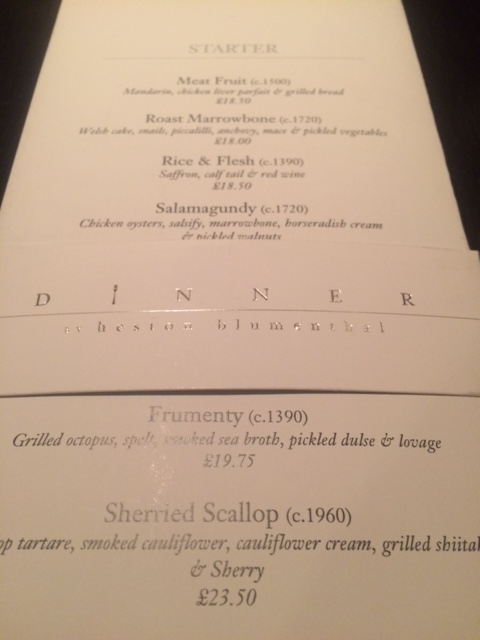 The maître d came to our table to explain that each dish on the menu was inspired by a period in culinary history, some from Heston’s own invention, others based on recipes from books going as far back as the 13th Century which had been adapted and given modern twists, with the date of each dish listed in brackets next to its title.  On the back of the menu each dish was listed with their origin source, including the book and date each recipe came from.

For our starters, I chose the Sherried Scallop (c.1960) while Sam went for the Rice & Flesh (c.1390).  While we waited we were brought some beautiful sourdough bread which had a wonderfully crisp crust and soft centre.  Our starters quickly followed, with the waiter taking it in turn to explain each of our dishes – just another little service that enhanced the experience.

My dish of Scallops contained lightly pan-seared scallops, scallop tartare, smoked cauliflower, cauliflower cream, shiitake mushrooms and a sherry sauce, and to be perfectly honest, it blew my mind.  The pan seared scallops were just barely cooked, so tender and full of fresh flavour, the tartare (which is something I would not normally eat) had a soft and delicate texture, bound together in the delicious flavours of cauliflower and sherry.  The dish was immaculate and I devoured it in a matter of minutes. 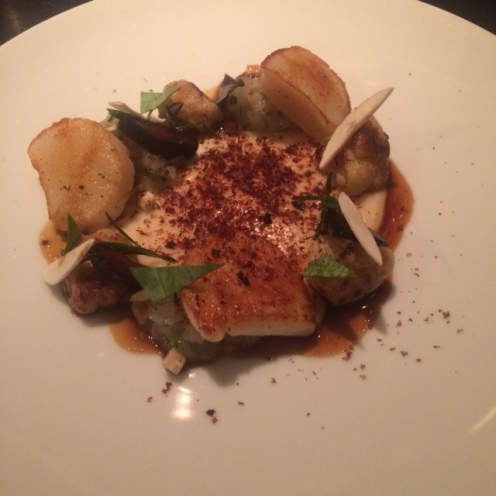 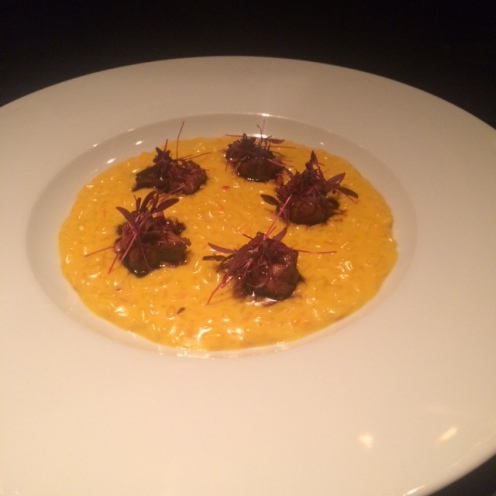 Rice and Flesh, Dinner by Heston

Sam’s dish, named simply ‘Rice & Flesh,’ was perfectly cooked saffron risotto topped with small chunks of slow-cooked calf tail in a red wine sauce, and it too was divine.  The meat was tender and the red wine gave incredible richness, balanced with the lightness of the indulgent saffron risotto.  Our starters were quickly cleared away and after a short wait, our main courses arrived.

I opted for the Powdered Duck Breast (c.1850) accompanied by braised and grilled cabbage, spiced umbles and pickled cherries, with a duck sauce.  I had to ask the waiter what exactly ‘umbles’ were, and must admit I felt a second of horror when he told me they were duck hearts – mostly because I’d already eaten half of one, but also because they were actually really tasty, full of that gamey duck flavour.  The duck breast itself was perfectly pink and had the texture of butter – something I didn’t know duck was capable of.  It was some of the most tender meat I’ve ever eaten and each mouthful was so full of flavour, my taste buds were in heaven! 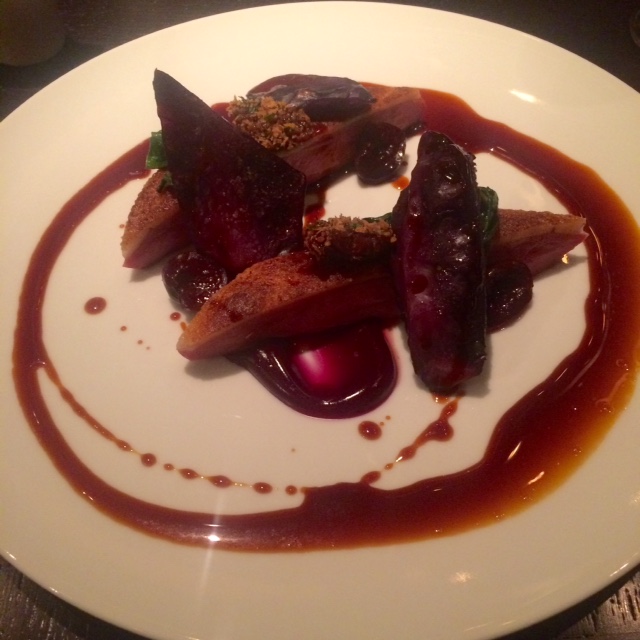 Sam opted for the Cod in Cider (c.1940) with chard & flamed mussels, which was, as expected, perfectly cooked, with a light, flavoursome sauce, and stunning roasted baby onions which added contrast to the light, fresh dish.

And then it was time for dessert.  I ordered a dish listed simply as Chocolate Bar (c.1730) while Sam ordered the Cheese board.  A selection of that day’s cheeses were brought to the table, where the waiter explained the flavours, textures and origins of each cheese, allowing Sam to pick and choose which ones he wanted – naturally he went for one of each!  His choices were then brought to him on a board with Damson paste, spiced apple & plum chutney, plus a selection of crackers.  My Chocolate Bar arrived looking so elegantly simple.  A bar of chocolate on one side, and the most perfect quinnell of ice cream in the entire world on the other.  The ‘bar’ was in fact a dark chocolate ganache filled with passionfruit jam and accompanied by a ginger ice cream and crumb.  The ganache was so perfectly balanced by the tart, fruitiness of the passionfruit jam, and the ginger ice cream had the perfect amount of heat, so light and creamy. 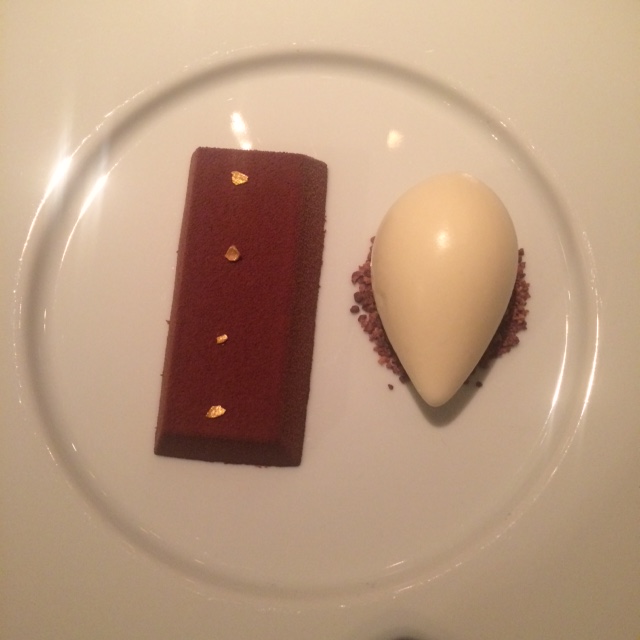 Shortly after our desserts were cleared, we were brought a ‘gift from the chef’ which consisted of a taster of chocolate ganache and a lavender and earl gray shortbread biscuit.  I don’t like either of those flavours so the biscuit wasn’t for me, but the ganache was stunning!

By this point, I was absolutely stuffed, until the waiter came to ask if we wanted any teas, coffees, or possibly some liquid nitrogen ice cream made in front of us at the table to finish our meal.  How can you say no?!

He came back with a trolley of equipment, explaining that the ice cream cones were made of puff pastry which was flattened and coated in sugar, providing stability and crunch.  Inside the cone, he placed a spoonful of rhubarb compote, to offset the creaminess of the vanilla ice cream.  He then proceeded to pour the ice cream mix into the stand mixer, followed by the liquid nitrogen, which billowed dry ice around us as he manually operated the mixer.  After only a few seconds, he produced two perfect scoops of vanilla ice cream, and offered us a selection of toppings.  I opted for apple popping candy on one side, and chocolate & walnut pieces on the other.  It was some of the smoothest ice cream I’ve ever eaten.  So creamy, full of natural vanilla flavour, and the crunch of popping candy, the beautiful crisp cone and the fruity compote provided the perfect balance of textures and flavours.  It was heavenly. 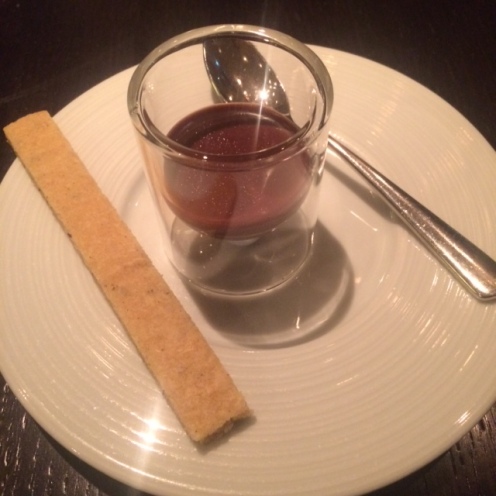 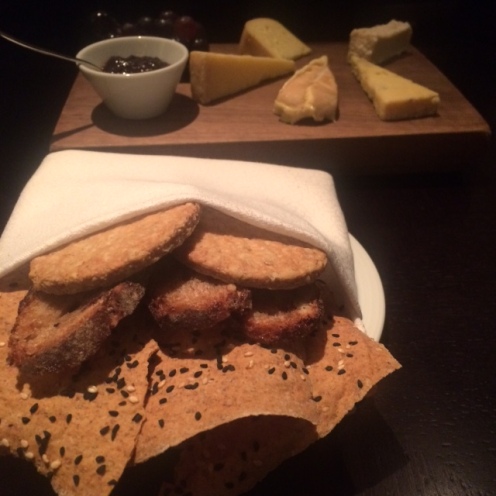 Cheese and Crackers at Dinner by Heston 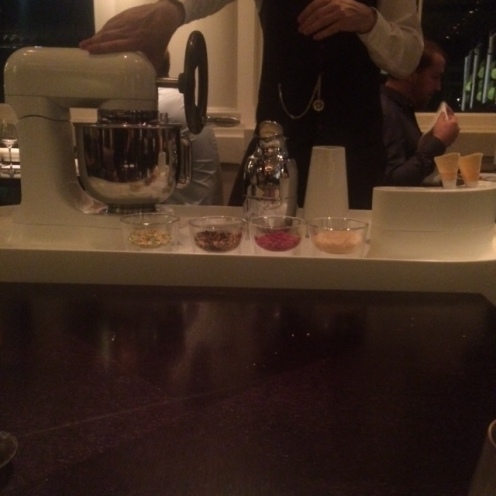 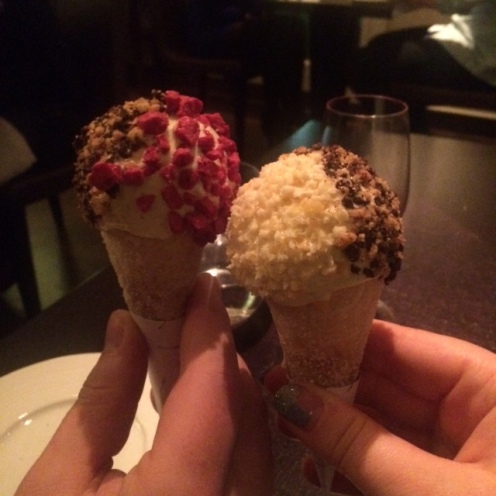 Ice cream at Dinner by Heston

This was the kind of food experience I didn’t even know existed.  The flavour of every dish was on a level I couldn’t comprehend, the service was so incredibly attentive and informative without ever feeling obtrusive, and every plate looked as though it had been artfully designed.  It was, naturally, a very big bill, but honestly, worth every penny, because it’s not every day you get to eat in a two Michelin-starred restaurant, is it?