It’s been more than ten years since I had a sit-down meal in a Chinese restaurant, there’s no real rhyme or reason as to why, I guess Chinese food, to me, has always meant take-away. In our house growing up we had one Chinese we always ordered from, but we never actually went and had a meal there. This weekend however, we decided to change that.

We decided to go out for a family dinner because it was my brother’s birthday, and he wanted Chinese. After much deliberation and researching where exactly my mum could get her Crispy Shredded Beef, we finally settled on Loon Fung in Canonmills. Loon Fung is almost an institution in Chinese cuisine in Edinburgh now, having been in the same spot for over 40 years with a very loyal yet varied clientele. I had never been there before, but after talking about it all week, by the time it came around, I was desperate for a good Chinese.

Walking into Loon Fung, the first thing I noticed was how busy it was. I guess this is kind of a given at the weekend, but it was clear the restaurant was popular. The second thing I noticed was the smell – I was starving and it smelled heavenly in there. Unfortunately, we arrived a good twenty five minutes early and our table wasn’t ready yet, so we headed to the pub next door for a quick drink.

When we returned, we were quickly seated at our table, given menus, and had drinks orders taken. I should point out, if you’re worried about spending too much on booze, Loon Fung is a cheap option with decent bottles of wine priced at around £16.75. A down side to Loon Fung is that its size is a little on the small side for its popularity and the tables are all rather close together so you might feel a little cramped, but the staff are friendly and happy to explain any dishes to you. 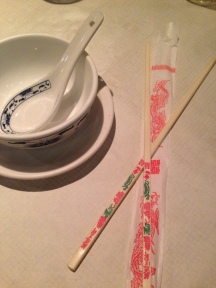 We started perusing the menu and the gruelling task of getting four people to agree on what dishes to order began. In the end I think we went a little overboard, ordering three dim sums to start, five mains and two portions of egg fried rice.

Our Dim Sum included Roast Pork Buns, Shiu Mai (pork & prawn) and Har Kow (prawn). The pork buns were quite large and for that reason, only two. There being four of us and me not being a fan of seafood, I got one big one all to myself and I was so happy I did! The dough was soft and perfectly steamed and the meat inside was tender and full of flavour – most likely char siu style. My only criticism would be that the filling to dough ratio was a bit off, there needed to be a bit more pork and a little less bun as the dough is quite thick. 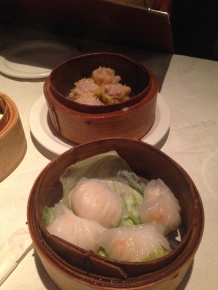 I also had a taste of the pork and prawn Shiu Mai dumplings because I was so darn hungry and I figured well, it’s only half prawn! The pastry was lovely and silky smooth and the filling tasty, although there was definitely a distinct prawn flavour but it worked well with the pork.

Our starters were taken away, hot plates put on the table, and we were brought our fried rice for the mains, which were placed in the small bowls we had already been given. Yes, one small Chinese bowl and spoon and a set of chop sticks, that’s what you eat your food with here. There’s no cutlery unless you ask for it so we all decided to soldier on.

Our mains were Shredded Beef, Sliced Pork in Barbecue Sauce, Cha Cha Chicken, Salty King Prawns and Chilli, and Singapore Noodles. We had originally ordered Char Siu pork but the staff recommended the dish we ended up with, describing it as more of a hoisin style sauce and it was by far my favourite. It had strong Asian flavours, tender pieces of pork drenched in a sticky, sweet and salty sauce. 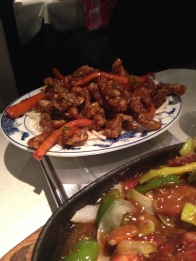 Another favourite was the Shredded Beef. One of the down sides to ordering this dish from the take away is that by the time it gets to you, the beef is no longer crispy. The dish in front of us however, was exactly the way it should be. Super crisp strips of beef in a sweet chilli sauce with sliced carrot, onions and other veg.

The Cha Cha Chicken, which was described as being served in a mild, sizzling ginger sauce, was rather bland. As my mum so eloquently put it, it looked “rather anaemic.” There was very little colour to it and next to the other dishes it just sort of paled. On tasting the flavour was nice and the vegetables were crunchy, it just didn’t excite me. Personally, I wanted to go for their Special Lemon Chicken – a dish they are known for – but in all honesty, we didn’t really need it, we already had so much food.

I can’t comment on the prawns because I don’t eat them, I’m told they were tasty but had gone a little soggy. The noodles were great – a lovely taste from sesame oil, soy sauce, lots of vegetables and varying meats. By the end of the meal we were all stuffed and there was very little left on the table. What we were all surprised by was the bill. For four people, two bottles of wine, two beers, three starters, five mains, two sides and a tip, the bill came to £108. This, in my opinion, is very reasonable and great value for money because the quality of the food is high and the service was good.

All in all, I’m definitely going to consider going out for Chinese meals more often, because Loon Fung was definitely a winner.