To everyone in Glasgow right now campaigning for Krispy Kreme to open a store in our great City, just stop, I’ve found something better. 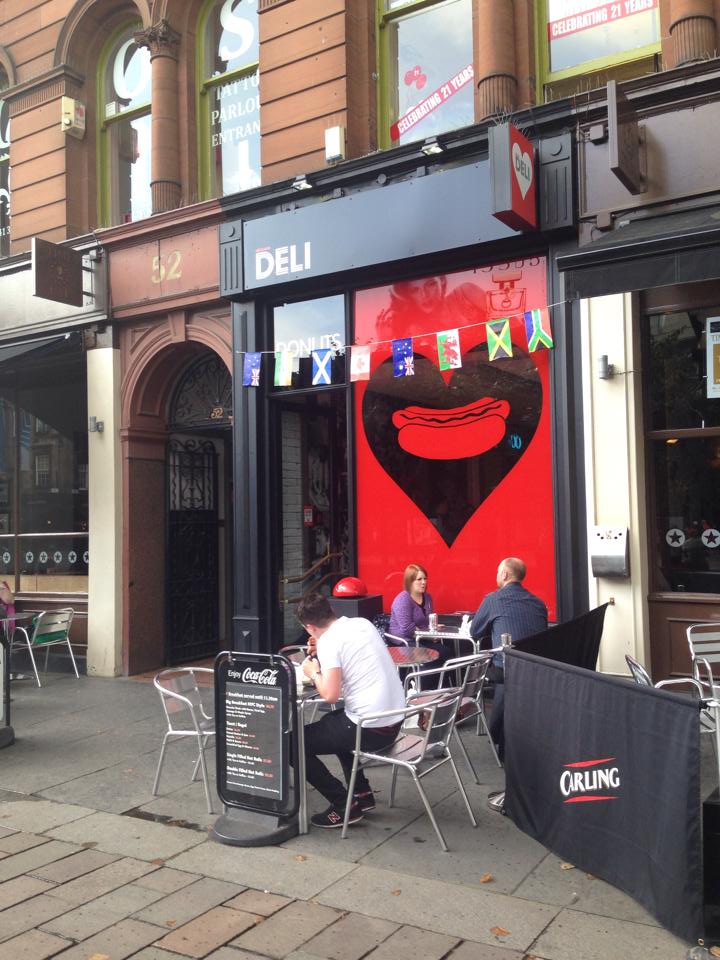 I’m sure many people have discovered the wonders that lie inside Nics NYC Deli but for me, after months of wanting to go, I finally made the trip last week.  These guys are becoming so popular they have actually just opened up a second store in Hope Street which has more indoor seating available, as the current location on St Enoch Square has limited space.

I came in to grab lunch to go, looking for a good filling sandwich and more importantly, one of those doughnuts I had heard so much about.  I was really torn between getting a sandwich or a hot dog, knowing however that I was planning on fitting in a doughnut afterwards I opted for a sandwich.  I got the LA Club Lite, which included avocado, WARM bacon, WARM chicken and all the usual trimmings.  There was a choice of mayo, I went for chipotle, but they included low fat and dijon mustard versions.  The sandwich was served on my choice of bread, I went for the herbed focaccia, and was a satisfying and hearty lunch, yet I felt some regret.  In hindsight, as much as I enjoyed my lunch, I wish I had been more adventurous, perhaps going for the pulled pork or just getting a damn hot dog – something I won’t hesitate to do next time!

Essentially, with so many choices, I panicked and went for a combination I knew I would like, and don’t get me wrong, I enjoyed it a lot, but there are a lot of other things on the menu I would love to try instead.  Oh well, guess it just means I’ll have to visit a lot!  The sandwich prices range from around £4-5 – seems a lot I know but they are big and very filling, freshly made in front of you with hot and cold fillings.

While my sandwich was being prepared I stared into the doughnut cabinet trying to figure out how to choose.  In the end I went for a Terry’s Chocolate Orange doughnut which I was desperate to sink my teeth into.

Honestly, I didn’t expect much.  I knew how much I loved Krispy Kreme and how no other doughnuts usually compare, so when I had my first bite, I was genuinely surprised by how light, soft and full of flavour it was.  The chocolate icing was well flavoured with orange and the doughnut just so soft – I ate the whole thing in seconds and wished I had bought more than one.

I mean look at it, it looks great, doesn’t it?  It tasted even better.  The price is pretty much on par with Krispy Kreme, with a dozen of the deli doughnuts costing around £12.  The plus here is that they also offer a half dozen for £6.99 – a price I would be more than willing to pay.  They come in an amazing array of flavours and are topped with treats like Kinder Happy Hippos, Ferrero Rocher and Chocolate Orange segments.  So stop fussing about the fact that Edinburgh has a Krispy Kreme shop and we don’t – who needs one when Nics doughnuts are twice as good with a hell of a lot more choice?!  It’s a no brainer – get your butt to Nics NYC Deli…NOW!